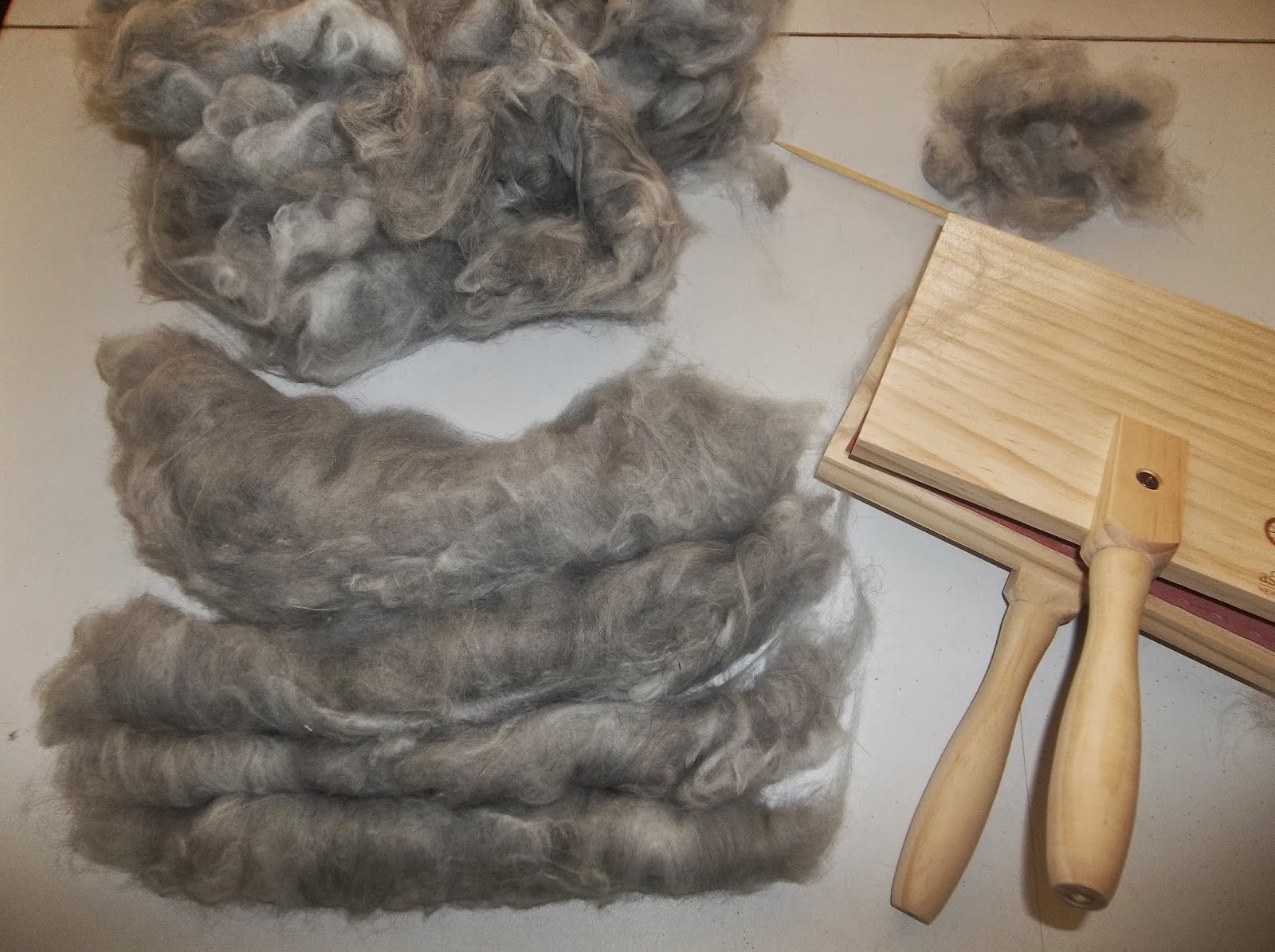 After doing the usual Monday morning chores, I dug out some angora fiber and experimented with different kinds of rolags/punis for spinning.  The fiber is so soft and light that it is a breeze to prepare.   The little pile in the back right is the waste fibers-little felted areas or short pieces. 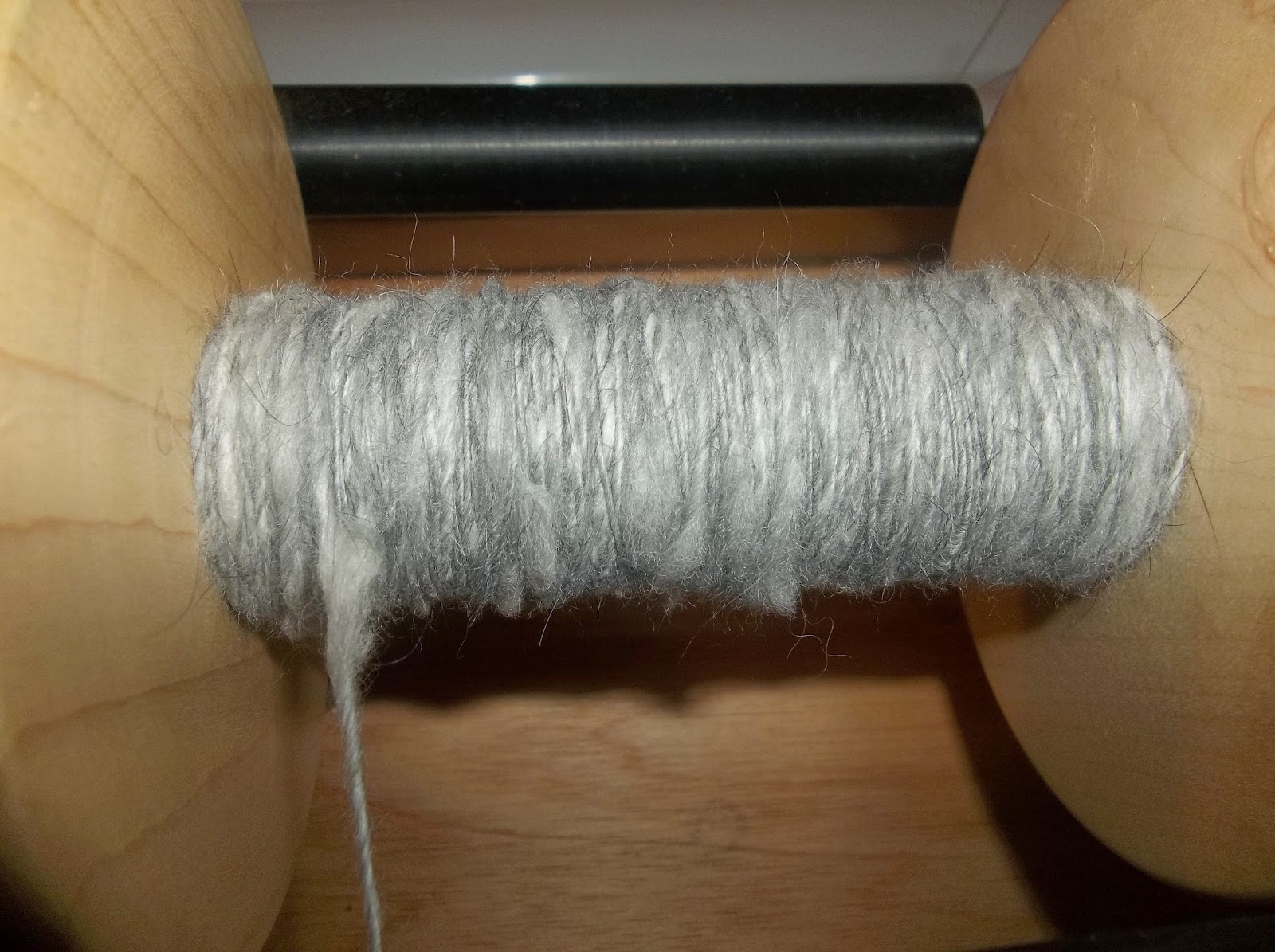 The fiber is long at 3-4" and spins beautifully.   I am using my e-spinner set at a good clip with little draw in so that it is easy to control the slippery fiber.   It is so soft even on the bobbin! 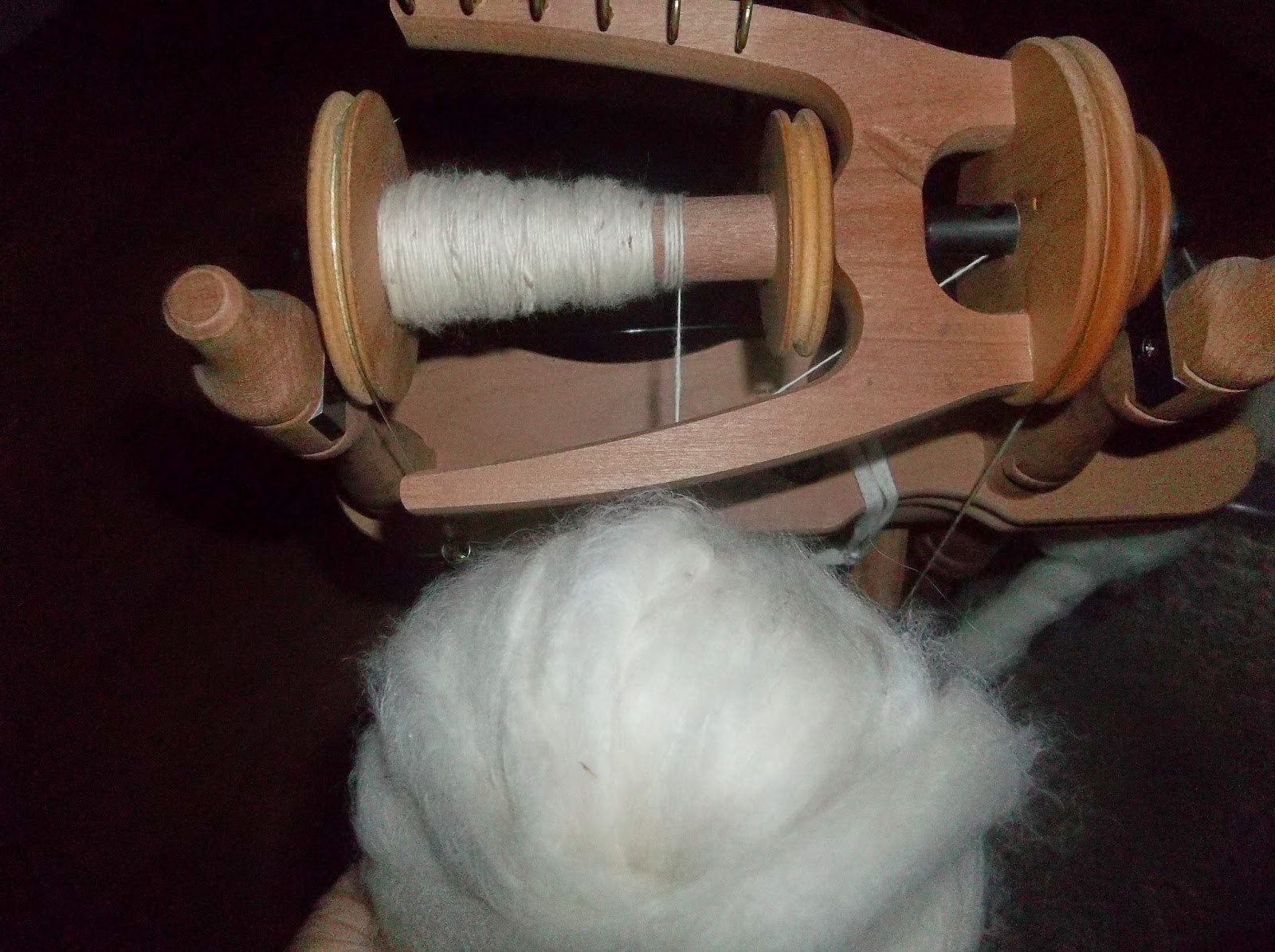 I did some exercise by spinning on the Traveler so I did some treadling also.   I am spinning some prepared Suri Alpaca top and it is spinning very nicely!   I have tried to prepare my own Suri twice and it was a huge misery so this was going to be my last attempt at spinning this fiber.   I am glad it is going well.  I hope to ply this later today so I can see how the yarn turns out. 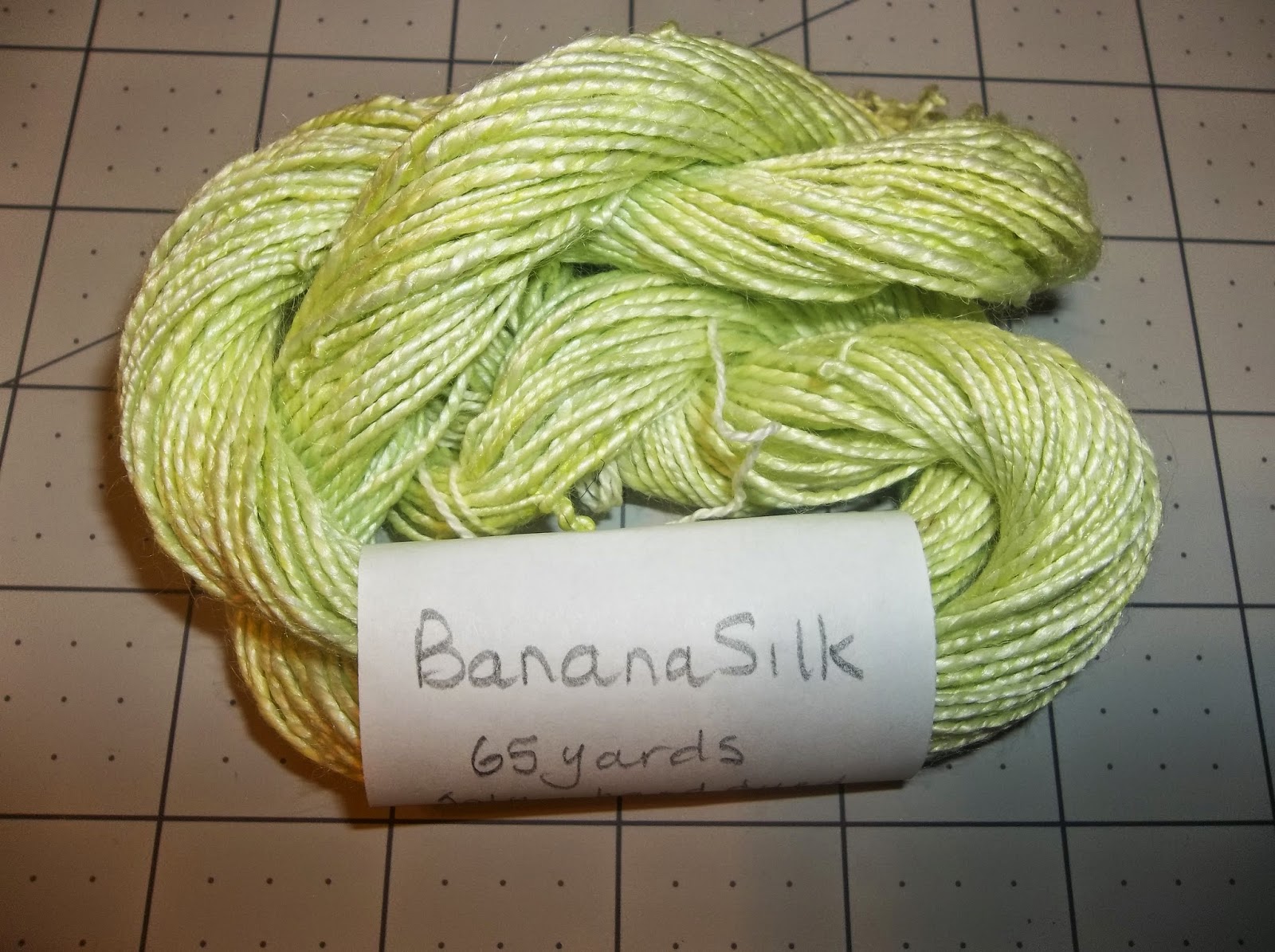 I did the mini skein of Banana Silk!   More of the yellow tones washed out after I had the skein plied but it is a pretty color-now what to do with such a little skein-probably a washcloth because it has the feel of linen.  (I hope it will soften up after each washing like linen does!) 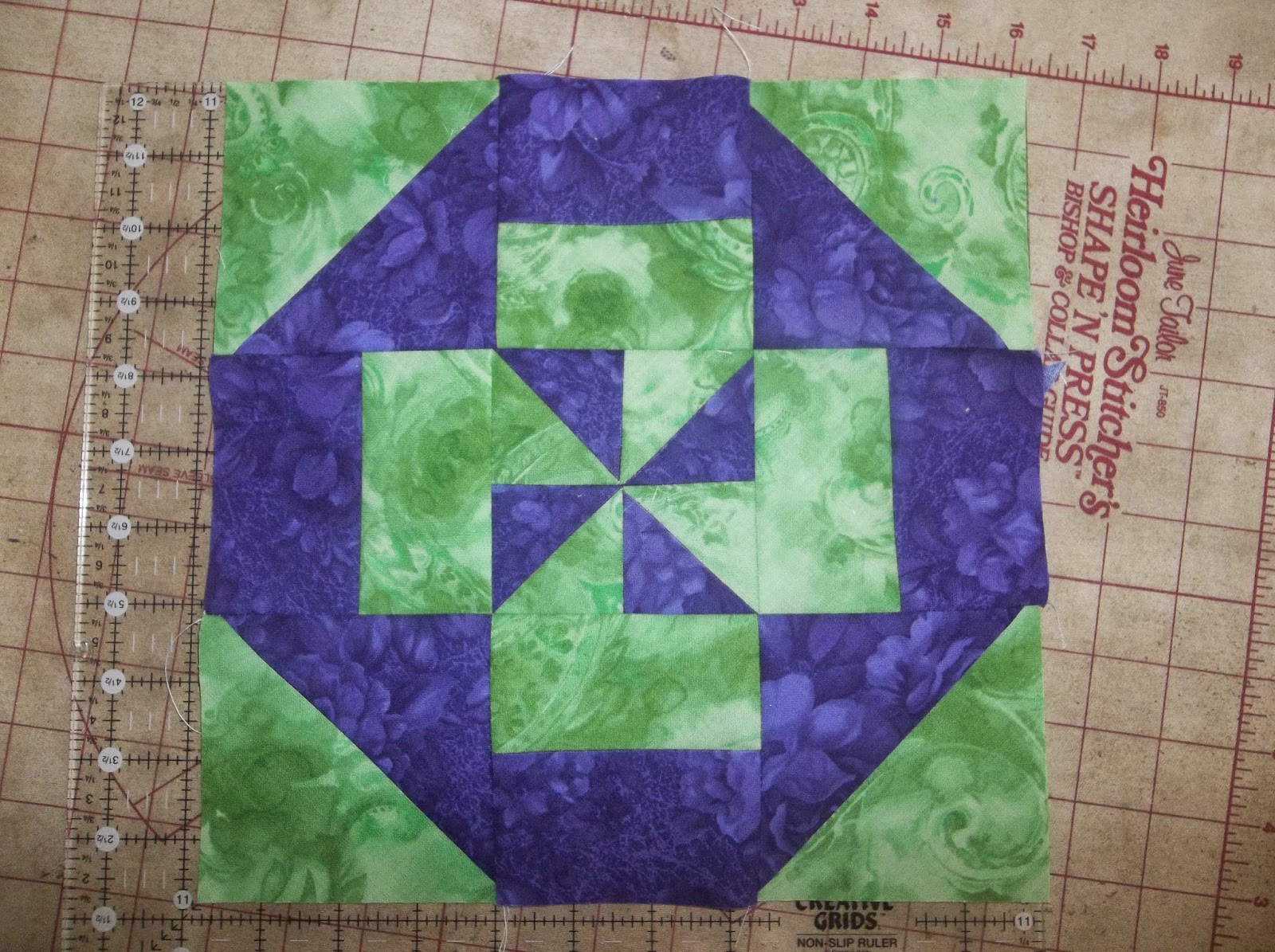 I played with the disappearing block again-using two colors instead of a neutral for the second layer cake square.   I am happy with the results! 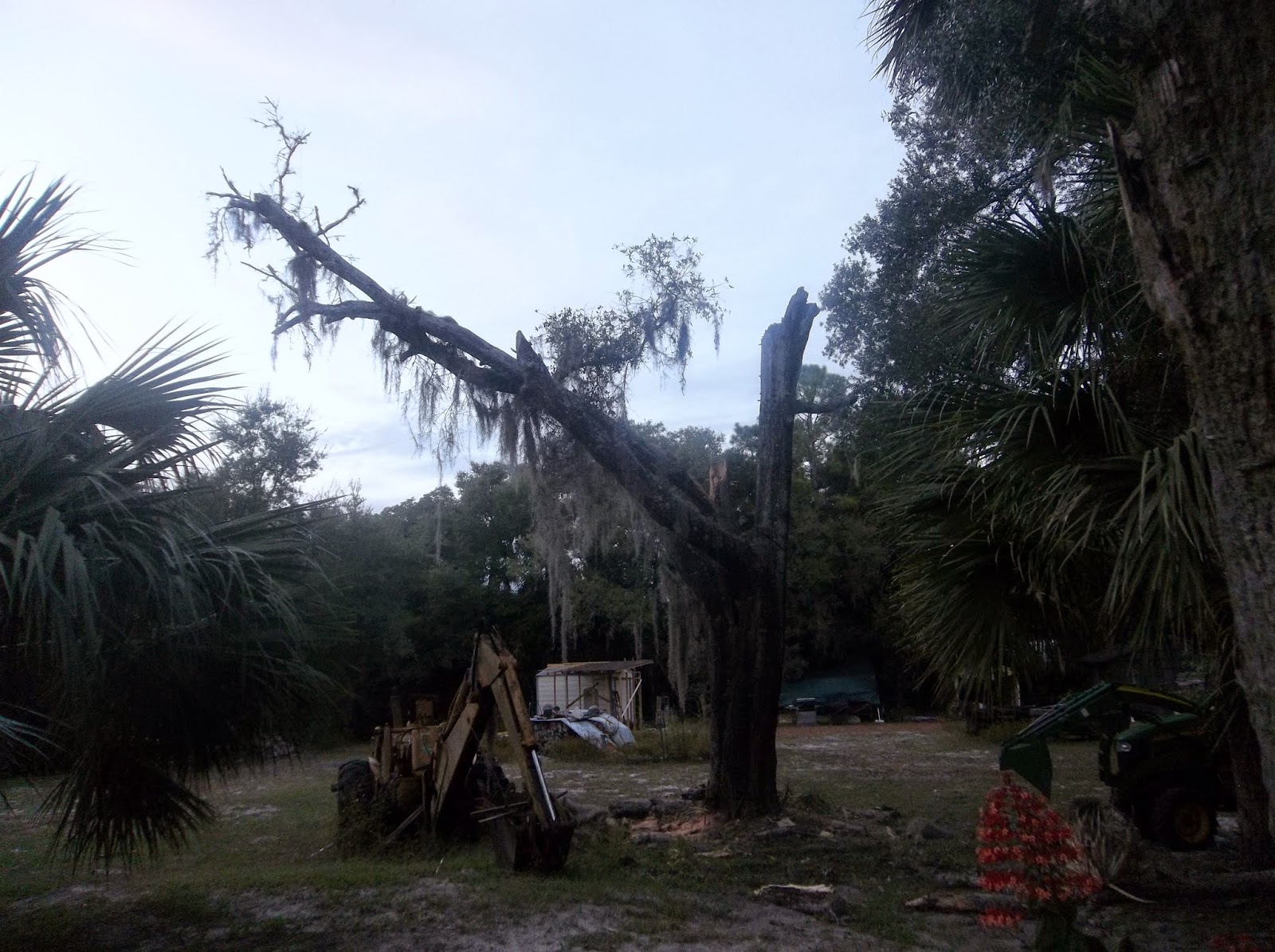 While I was playing inside, Bill decided to tackle this dead tree removal at dusk. 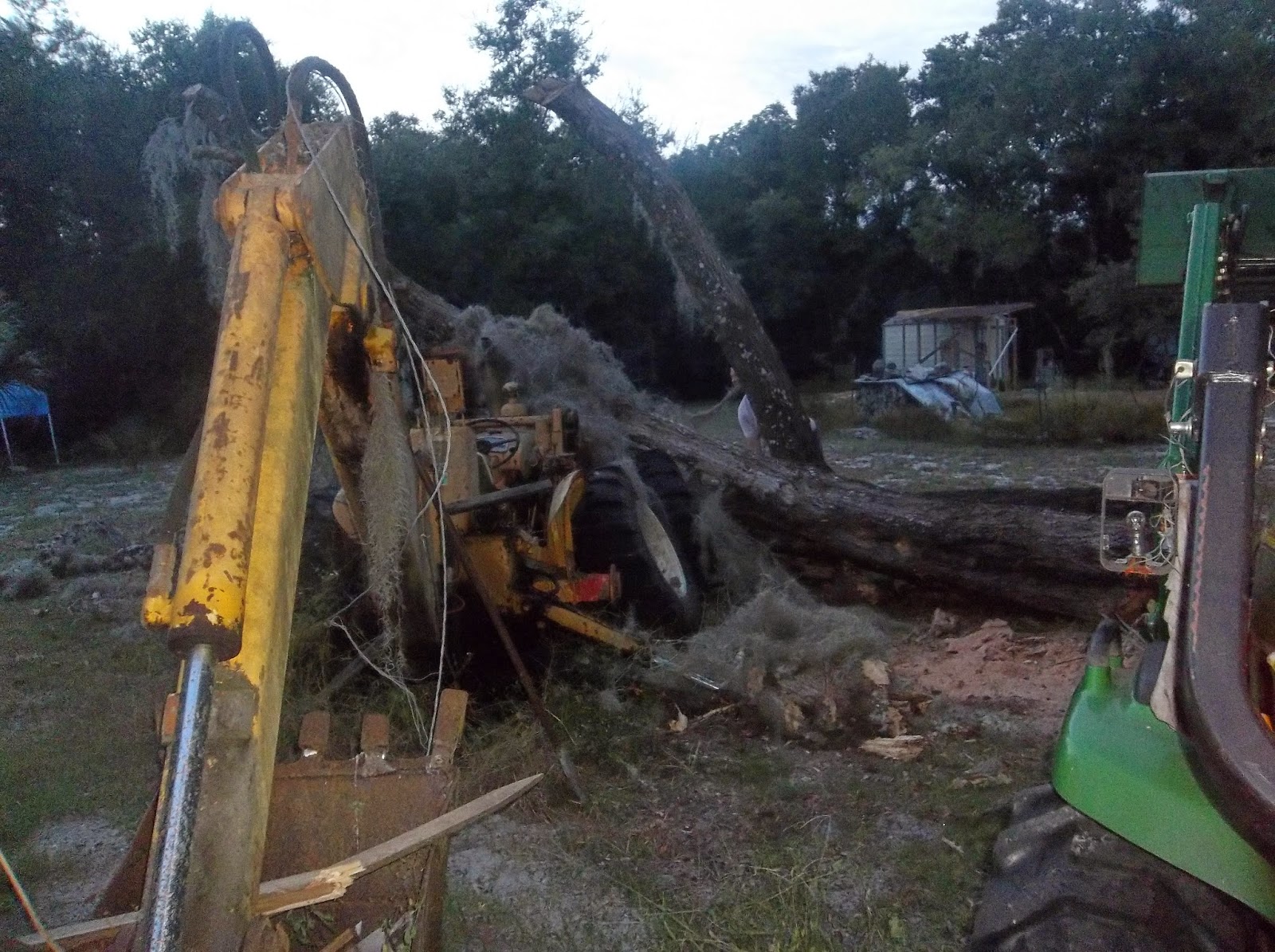 He was cutting it down so the big branches wouldn't fall on his someday project, restoring this backhoe.  Oops!  It went right on top of it when the tree went down! 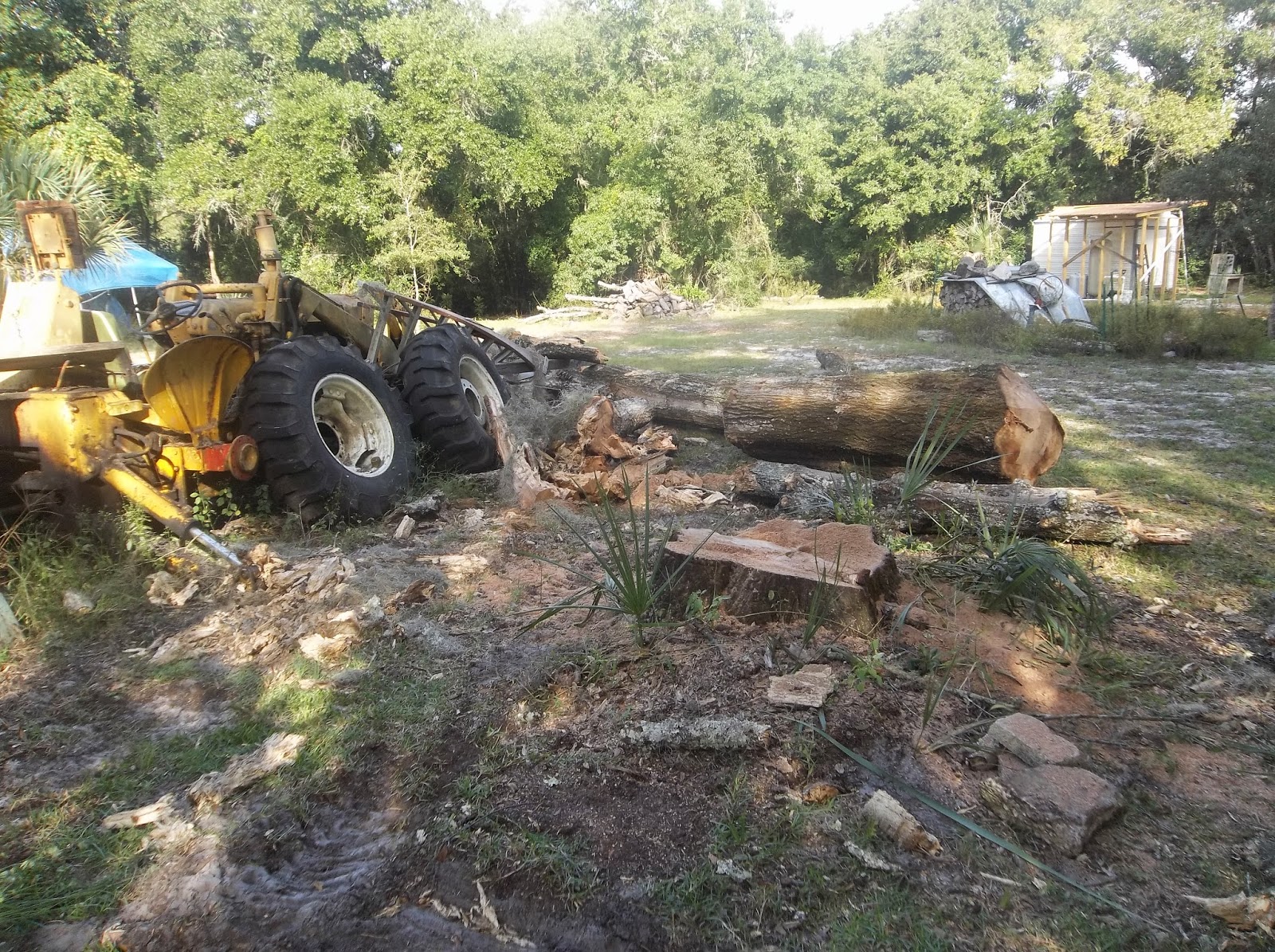 This morning as he cut up the trunk and branches, he could see that it fell on the strongest part of the chassis and didn't damage it at all!  It looks better without the tree there now! 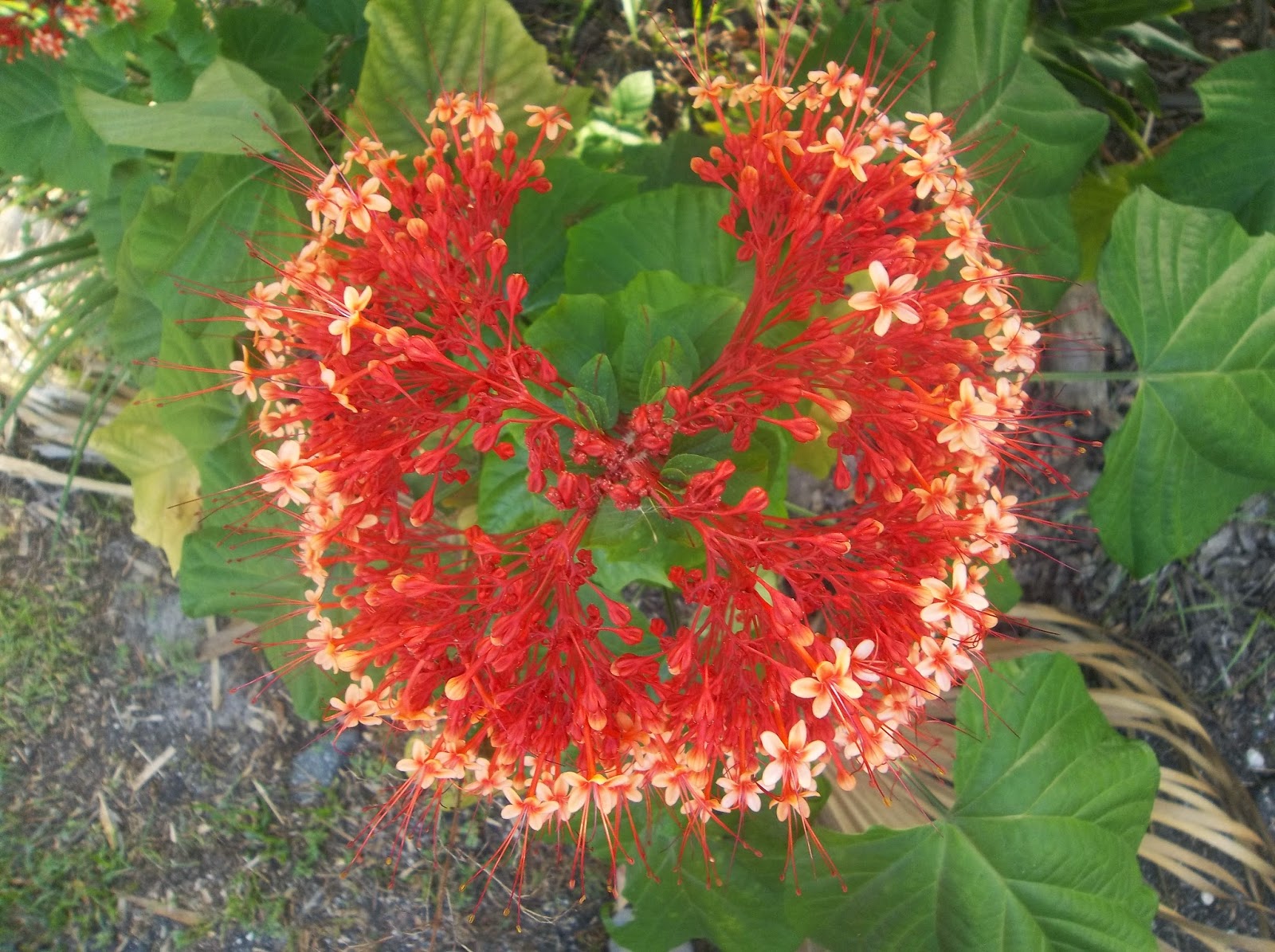 Isn't this pretty?  It is looking down on top of the last pagoda bloom. 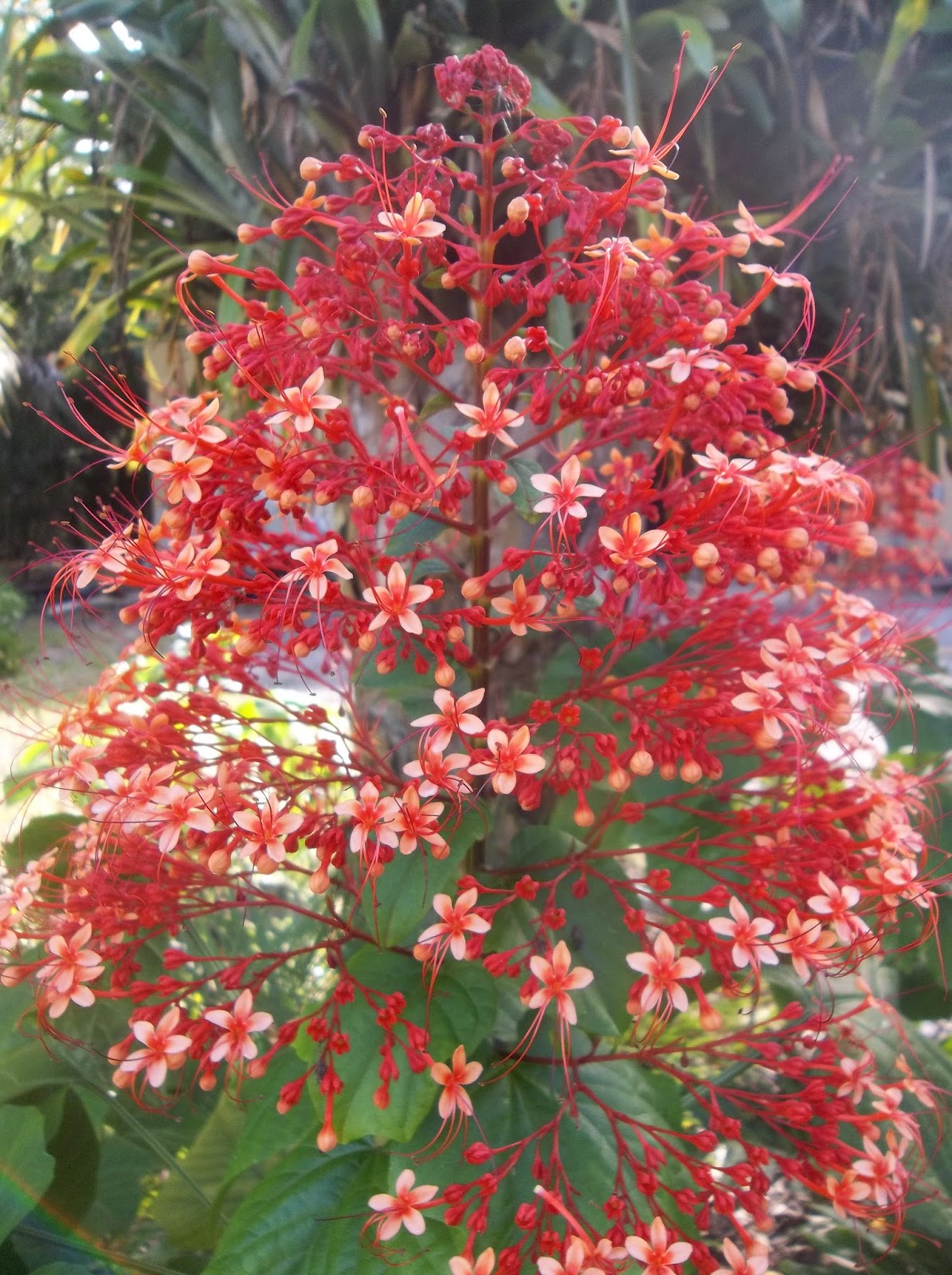 A FULL DAY AHEAD

I couldn't bear it anymore-it's hard enough not to use my hand but not being able to swipe a screen was too much! lol  It works now!... 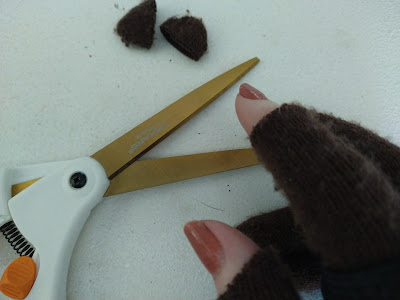